Kelate is our proprietary herbal oral chelator for Toxic Heavy Metals. It should be your first-choice whole-food supplement to help remove these elements. Health professionals are rarely alerted to the possibility of metal exposure and its dangers. 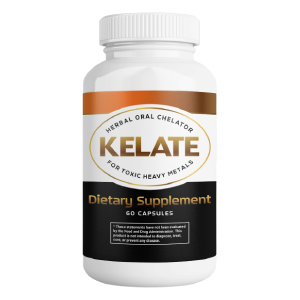 Heavy metals accumulate in the body causing numerous health problems that can seriously impact every major organ in the body, further complicated by the fact that environmental threats have never been higher as exposure to these metals occur through our diet, from medications or in the course of work or play. No matter the origin, studies now show that heavy metals in the body may be implicated to: Alzheimer's, cardiovascular disease, behavioral problems, kidney dysfunction, Parkinson's Disease, epilepsy and even paralysis.

Chronic exposure to metal dusts is also linked to a sharp rise in pneumoconioses, neuropathies, hepatorenal degeneration and a variety of cancers. These syndromes develop slowly over time and are difficult to isolate clinically. If heavy metal toxicity is suspected, however, take the time to perform a thorough dietary, occupational, and recreational history as identification and removal of its source can be complicated.

And this is precisely why you should be looking at whole-food formulas such as Kelate as a low-risk prevention alternative. Take a moment to consider your exposure to heavy metal toxins at home, at your workplace and in your everyday life, and adjust accordingly with the required dietary changes and any number of new chelation therapies to offset prolonged threats to your wellness.

What You Need To Know About Lead, Aluminum and Mercury

With the elimination of lead-based house paint, and the increased use of lead-free gasoline, lead poisoning is certainly much less prevalent than in previous years. However, low-level toxicity is still an issue. Coal burning power plants still spew lead into the atmosphere and - as is the case with mercury and aluminum - the problem with lead is that it accumulates in the body. So unless you take active steps to remove it, the EPA estimates that 10 to 20 percent of critical human exposure may come from lead in our drinking water.

It has been known for 20 years that once aluminum enters your body, it accumulates in your brain where it kills off neurons leading to memory loss. And thanks to the significant aluminum levels found in food emulsifiers, antiperspirant deodorants, hair sprays, baking powder, many types of toothpaste, much of our drinking water, and most of our cookware, you are now exposed to greater amounts of aluminum over the course of your lifetime. As was reported in Brain Research, Vol.7 84:98, the combination of aluminum and fluoride causes similar pathological changes in brain tissue found in Alzheimer's patients.

People have known about the dangers of mercury since the days of the Roman Empire, when slaves who worked in the quicksilver mines died horribly after 2-3 years of exposure. It's no secret that mercury is one of the most toxic metals known to mankind. Numerous studies have shown its impact on health and there is strong evidence that mercury lowers T-Cell counts. This, alone, implicates it in cancer, auto-immune diseases, allergies, candida overgrowth and multiple sclerosis. It has also been noted that mercury cuts the oxygen carrying capacity of our blood by half. This would account for many instances of chronic fatigue.

Mercury also has an affinity for brain tissue and is implicated in brain tumors and dementia and also has a natural attrition to fetal tissue, which may account for its implication in birth defects. In 2002, the National Academy of Sciences found strong evidence for the toxicity of methyl mercury to children's developing brains, even at low levels of exposure. Today, we face two primary sources of exposure: our food supply and our dental fillings.

Why Cilantro and Cracked Cell Chlorella?

Cilantro is a natural herb that helps change the electric charge on intra-cellular deposits of heavy metals to a neutral state, which in turn relaxes their tight bond to body tissue, freeing them up to be flushed from the body. Once free, the next step is to actually facilitate the removal of the metals from the body. And here's where cracked cell chlorella comes in.

Cracked Cell Wall Chlorella is a single-celled algae. It is derived from purified water and toxin-free nutrient chemicals – trace elements – and is free of toxic residues and has no chemical additives. It is a pure food and possesses the capacity to absorb heavy metals.

In studies undertaken in Germany, cracked cell chlorella has been found to be very effective in eliminating heavy metals from the body, the brain, intestinal wall, muscles, ligaments, connective tissue, and bone. So when these two elements are blended synergistically, this herbal formula helps produce a powerful oral chelation. Remember, Toxic Heavy Metals do not leave the human body without some assistance from dietary supplements and whole-food detoxification still remains the safest method of removal.*

Help remove toxic heavy metals with 'Kelate' as part of your wellness plan!